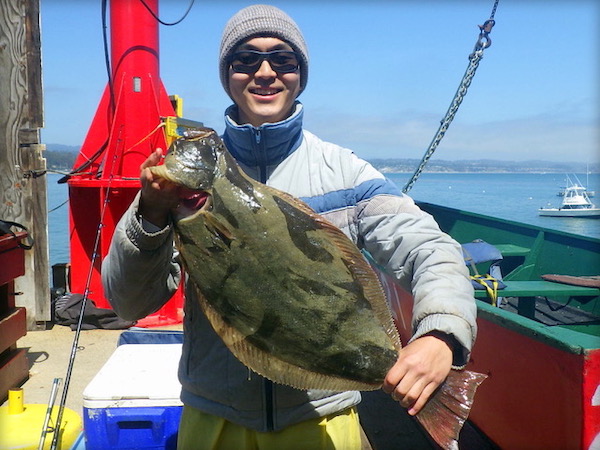 Seas are calming slowly after significant south and west swells rolled through Monterey Bay last week. Along with strong afternoon winds, this made fishing a bit difficult. The coming weekend forecast calls for medium swell and winds, though within our protected areas of the bay conditions could be very mild. One thing for sure, you won’t catch fish if you don’t go fishing.

Lately, if you haven’t been catching fish it could only be because you haven’t been fishing. The bite is on for a variety of species. Rockfishing remains very consistent, especially on the deeper reefs. With the south swell halibut fishing slowed, but at the same time fishing for salmon got better with fish biting in more areas of Monterey Bay and in much shallower water. Last week Kahuna owner Carol Jones said “We’re going salmon fishing tomorrow.” Anglers aboard the Kahuna boated limits of salmon on the Fourth of July, and caught half limits on the next-day trip.

Chris’ Fishing Trips out of Monterey ran salmon trips nearly every day last week. These mooching excursions averaged just about a fish per rod across the board. On Wednesday, Todd Fraser from Bayside Marine reported, “The salmon fishing was slow again today but there were a few fish caught near Santa Cruz Harbor, Pajaro, and Moss Landing.” (There were) a few anglers who caught one to three fish. There were scattered reports of salmon near Soldiers Club, Pajaro, and straight out front. The one consistent thing was the fish were near the bottom in 120-200 feet of water.”

It is shaping up to be one of the best seasons for halibut fishing in recent memory. This latest swell slowed things down, but by the weekend, we should see numbers of halibut going back up. Expect the average size of flatties to increase as well, as the big breeders move in over the next few months.

All we need now to make things complete is some tuna action. Earlier this year, a few bluefin tuna were caught fairly close to shore, but those fish disappeared. There’s always a chance they’ll come back, and always a chance for an albacore bite to develop further offshore. Another fervent hope is for white sea bass. There are always a few of these fish around. A juvenile sea bass was caught and released at Capitola Wharf this week. And, the lovely Miss Beth hooked up a few sea bass this week while transiting the north coast area.

On Sunday Beth Norton from Go Fish Santa Cruz reported, “Captain JT and Deckhand JP took the clients north of Santa Cruz to the big reef area. They had early limits of quality rock fish. They hooked six ling cods but had to throw back four as they were too small but had two nice keepers. They headed back downhill and found sea bass. That kept everyone hopping, hooking four and landing two.”