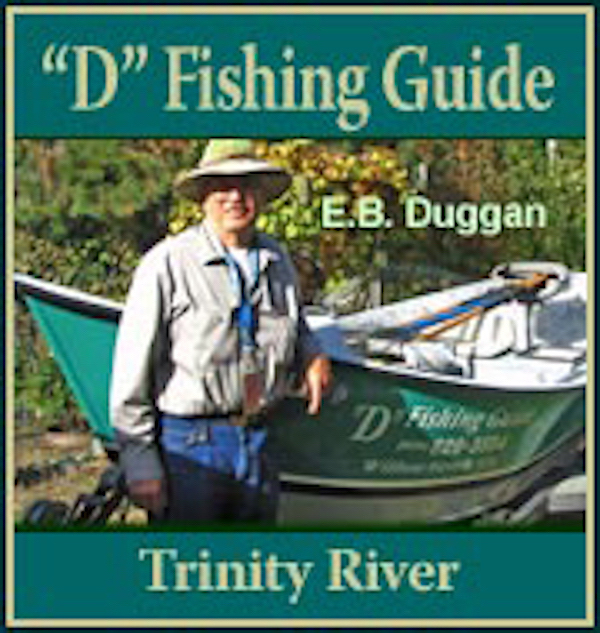 Sorry not to make a report last week but I was down south in Fresno to meet with some old cronies I used to work with.

The Trinity River summer flows are almost here. The summer flows are supposed to be reached by August 6th. This should be a sign at the mouth of the Klamath that the Fall Run of Chinook salmon need to start their migration up the river for spawning. The Lower Klamath opens up for Fall Run Chinook salmon August 15th, also the limits go to 2 salmon per day with one adult; 6 salmon with 3 adults in possession. The bad news is that the Klamath is full of moss right now and it is hard to fish near the bottom of the river without getting fouled up on moss. With the present heat and the abundance of moss I would expect to see a start of an algae bloom very soon. I also hope to have the list of river closures for Tribal Ceremonies ASAP. Right now, it is hard to get people to come to fish the rivers when the ocean fishing limits are 2 salmon over 22 inches per day and the Sacramento River is 2 salmon per day while the rivers are only 1 “fish” per day.

Fishing: Fishing the Upper Trinity has been great for the last week or so but the moss has been troublesome for pulling plugs. Because of the heat it has been an early morning fish. Most guides are starting by first daylight and off the water by 1:00 O’clock in the afternoon. I have received word from several guided that the upper river is chock full of bright chrome fish and that it is fairly easy to get your one salmon and then fish for summer run steelhead. Most guides are using roe and back trolling plugs. Plugs the first thing in the morning and then switching over to roe later in the mornings. Fishing from the bank I would think spinners or spoons would be your best bet for early mornings then switching over to roe, tuna balls or 50/50 tuna/roe. For the fly guys midges are working and the hatching starts as soon as the sun hits the water.

Todd LeBoeuf of “Tiger TS guide service” has been fishing the Trinity from Lewiston down to Junction City for the last week and has been very successful of getting his customers limits. One of his customers Bo, came all the way from Sweden to fish the trinity with him. Another of his customers Autumn caught her first salmon while fishing with her grandpa. Most of the salmon were around 10lbs with one large one about 20lbs and for the week Todd’s customers were able to land 10 salmon. No bad for a week’s work.

With the moss so abundant and the heat with the sun I can see algae blooms looming in the near future. This is bad news because blue-green algae is what has been killing the Eel River. I see this as a great possibility for the Trinity if we don’t get the moss under control soon. The Eel has almost lost the salmon runs because of the algae and that could very well happen to the Trinity if something isn’t done.

The restoration work between he Round House and Junction City is making the river very dirty by 10 O’clock so you want to try and void that area around 11:00am to sometime in the late afternoon. As for the Trinity Restoration Program I believe congress should audit the over all program to see if the $15million dollars per year are being spent is for a just cause (production of endangered fish) or just to fill someone’s pocket with cash??

Mid-Klamath: The Klamath at Weitchpec is flowing about 3,488cfs and the river has turned a brown green. As the river drops a little more, we should see the beginning of the fall run Chinook arriving. There are still not very many fishermen out on the Mid-Klamath right now. Sometime around the 1st or 2nd week of August we should start to see some larger salmon fish come into the area looking for some cooler water and getting ready to move up the river. River temperatures are starting to climb some now (71.5 degrees @ Terwer) and that could hamper fishing if we don’t get a cooling spell soon.

Trinity Lake: the lake is 14ft below the overflow (an increase of 3ft) and 91% of capacity (a decrease of 2 %) and inflows are 654284cfs and releases are 2,022cfs into Lewiston Lake with  1,303cfs being diverted to Whiskeytown Lake and on to Keswick Power Plant, which is releasing 10,889cfs into the Sacramento River.

Temperatures in the Valley last week were 104 hi with a low of 52. Rain for the week was 0.00in with total rain for the water year to date of 67.7 inches, with snow of 4.5in. in the valley to date. Forecasts for next week are for temperatures at 90 to hi 80s with lots of sunshine for the next eek or so.  I would like some cooler weather and cooler water so the Fall Run Chinook would start to make their run for their holding waters up river.

Forecast for temperatures next week are expected to reach 100 with a low of 53, the prediction is for sunshine for the next week and a half and then a scattering of clouds.  The expected high is for Sunday and then maybe a cool down.