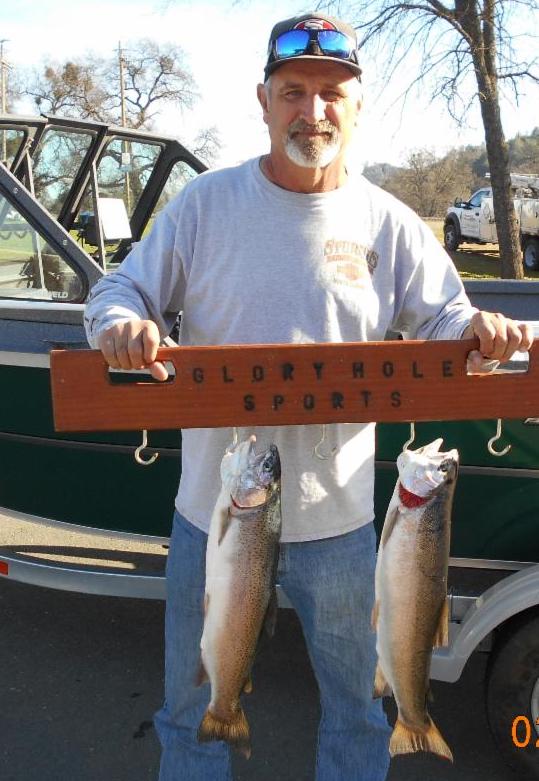 This Saturday February 15, we welcome the Future Pro Tournament. With a 75 boat field it should produce some good weights at the weigh in. Signups at Glory Hole Sports, opening up at 4:00 am. for the event. New Melones Reservoir's current lake level is 1048.82, dropping 2 feet in the last two weeks. New Melones is 39.18 ft. from full. Water temperatures have been fluctuating, going from 58d. about 3 weeks ago,down to 51d. and now back up quickly to 54d.. Water clarity is excellent. Angels Cove launch ramp is closed, and the fish cleaning station remains closed at Angels Cove with water line breaks interfering with operations.

A word of caution when traveling from the rangers station towards Glory Hole Point. If your hauling any trailer over 10 ft. in height, be aware the Bureau of Reclamation has many oak trees that need to be trimmed to meet Federal Highway Administrations minimum vertical clearance on local roadways which is 14'. The trees overhang the road are creating hazardous driving conditions for you and your trailer/boat/rv having to often drive in the opposite lane of traffic to avoid these trees and prevent damage to your property.

Anglers FYI: For anyone with a potential lake record please call us at the store and hopefully we can send someone to weigh, photograph and measure the catch at the lake. GHS is the unofficial recorder of lake records for New Melones, and we understand there is sometimes conflicting interest in the welfare of the catch, whether or not to release the potential record, sacrificing your place as a record holder for the lake.

We do promote catch and release. For potential lake records, record the statistics of the fish... length, girth, weight and photographed at the lake before releasing her. If indeed we can verify the information that is provided, such as a witness, comparing the scale used with ours, a photograph with the fish hanging from the scale and can see the scale weight, etc...then we can accept this as proof. If your catch has expired then indeed bring it in to GHS so we can record it here, and you can have it mounted!

KOKANEE
No reports of Kokanee this month.

BASS
Anglers have been unintentionally landing bass while trolling for trout as far down as 80 ft. Point is bass have been in a mix of water depths. When fishing for bass, consider they are creatures of habit. With their main diet of shad and crawdads, your best bet is to mimic the best color for their diet in a plastic or rubber bait. Green pumpkin with a mix of another color are go to colors, along with a shakey head or darthead that will allow your bait to skim along and thru the rocks. Using a shad pattened color, try using it on a drop shot rig. More bass in the 4 lb. range have been reported the last couple weeks using these rigs.

CATFISH
No reports of Catfish

CRAPPIE
Off season for Crappie but anglers may hookup with Crappie when you locate schools of shad and trolling slowly, 1.5 mph or still fishing using a variety of baits from Speedy Shiners, Needle Fish,  jighead swimbaits & other plastics.